Interesting/incredible characters while on tour

Interesting/incredible characters while on tour

EVER CHANGE THE OIL IN YOUR KNEES?

Who when landing on branch too slender,

feels it give way beneath him;

Yet sings, because he has wings.

Well, we have wings, wings of the spirit,

With this attitude we cannot be defeated.

You see, there is a peace of God that goes

beyond all our ordinary understanding.

I hope you find enough to help you.”

Heat punctuates the air in South Georgia every summer. Humidity sticks to the skin like plastic sandwich wrap. For riding, the combination tortures a touring cyclist. All I could think about while sweating my way down the road was the next convenience store where I could buy a half-gallon of ice cold orange juice.

How much did I sweat on Route 82 headed into Waycross? It was so hot and humid that it was like pedaling inside a steam sauna. Sweat dripped from my scalp, before running down the back of my spine where it soaked into my jersey. From my forehead, it ran down into my glasses where it pooled on the rims. Some of it escaped down my nose where it dripped onto the top tube, then splattered onto my legs. Sweat hung from my chin and ear lobes until I shook it off. It ran down my arms, glistening through the hairs until it soaked my riding gloves. Rest stops made it worse when it dried and left salt cakes on my body and clothes.

Nonetheless, I pedaled toward the Atlantic on my coast to coast. A passing car's bumper sticker said it all: "A bad day of bicycling is better than a good day of work." You got that right, dude! I didn't mind the sweat because I explored the South. I'm not saying that it was scads of fun, nor was I in comfort, but at that moment in Georgia, that's the way it was--hot and sweaty. I accepted it because to complain would be useless. It's times like that, especially on a bike, I just live; I accept the moment. That's the special intrigue of bicycle touring. Sure, I love riding on the flats on an autumn day. It's easy pedaling and the air feels cool. I'm comfortable and dry. It sure beats busting my butt going up a 10,000 foot pass on a hot day. But there's the catch. The flats have their own beauty, but it doesn't compare to the mountains. Given the choice, I'd take the mountains even with the price of the climb.

That's the point--I accept the flats when they happen, yet love the mountains when it’s time for climbing. I couldn't change any of it at one moment anyway. I take it a day at a time.

No doubt about it that muggy day in South Georgia. I couldn't wait for a convenience store. I felt ready to buy their entire stock of orange juice. I suffered dehydration and I couldn't drink fast enough to replenish my fluids. Ahead on the left, I spotted a dilapidated, paint chipped building kitty-corner to the pavement. Gray moss hung down the sides of the faded white paint and red dust lined the windowsills.

Coke and Pepsi coolers with their colored logos stood like military sentries on both sides of a broken screen door. Two faded red Texaco gas pumps with broken glass over the meters, stood out in the sun. A bent tin roof provided shade for two long benches alongside the building. I looked like a dripping fountain as I rode up near the gas pumps and laid my bike against a pole. Two old men stared at me, but said nothing. Off to the side, a thin, gray-haired black man in tattered clothes sat gumming his ice cream.

Seconds later the door slammed behind me, kicking up a dozen flies on the screen mesh. Inside, a dirty wood floor led past an enormous lady sitting behind the counter, knitting a sweater. She wore a basketful of curlers in her hair, with three extra chins tumbling down from below her lips. I headed for the cooler.

"Just fine ma'am," I replied. "Sure am thirsty. Does it get any hotter than this?"

"The weather is like the flies," she replied. "You can't do nothin' about 'em, so you just get used to 'em."

"I guess you're right," I said. "Do you have any half-gallons of OJ? I only see quarts."

"Yes sir, near the bread on the second isle over."

I paid for two quarts of orange juice and a bag of chocolate chips. Seconds later, the screen door slammed behind me, kicking up the flies again. An old geezer had pulled up to the pumps to fill his pickup with gas. He complained about the heat. The two old men continued staring at me in silence. I wondered if they were alive.

After swigging the first quart, I inhaled a handful of cookies. A mongrel dog got up from behind the Pepsi cooler, walked over and sniffed me. He looked at my bag of cookies with pleading eyes. "Okay buddy, here's one for you, but that's all you get, unless you want to pedal my bicycle down the road." I flipped him a cookie. He walked back to his hardwood bed and began crunching on his prize. I grabbed the orange juice and belted down half the jug. The cold liquid slid down my throat and filled my stomach.

After chomping down on a second handful of cookies, I noticed my dry chain. I tossed the bag of cookies onto the pack along with the second jug of orange juice. After unzipping my tool pouch, I grabbed the spray can and spun the crank backwards. The chain rolled through the pulleys and threaded its way around the freewheel, and back toward the middle chain ring. Most of the lengths were dry.

"You gotta' check this chain more often," I muttered to myself. "This chain's dry as a bone."

I sprayed both pulley axles and drenched the freewheel. I cranked the pedals backwards slowly, spraying the chain as it came off the lower pulley. No matter how careful I was, oil sprayed onto the rim. As I squatted there, sweat dripping down from my brow and chin, the black man shuffled toward me. I was nearly done when he stood over me.

"Ever change the oil in yer' knees?" he mumbled.

"You ever change the oil in yer' knees?" he repeated more clearly.

At first I didn't know how to answer, but then I thought about it saying, "Only when they squeak, sir."

He laughed through his gums. The last of his ice cream cone vanished into his mouth.

"How far has you ridden that bicycle anyways?"

"From the Golden Gate Bridge in San Francisco." I said.

"It's true, I rode this bicycle starting from the Golden Gate Bridge. I've been on the road three months. It's no big deal. Lots of people have ridden across America on a bicycle."

"Well, I'll be hanged," he said. "I never dreamed a man could ride across this whole country on a bicycle."

"Some people have ridden a bicycle around the world."

We got to talking, ole Charlie and me. This 91-year-old man, wearing tattered clothes, was the son of a slave who was freed by Lincoln back in 1865. This toothless man, with clouded black eyes, yet a clear mind, possessed more historical knowledge than a history book. His father was brought over to America in chains on a slave ship to pick cotton in the Carolinas. When things heated up over the abolitionist movement, his father was sold to a tobacco grower in Waycross. After the Civil War, things didn't change much for his father, except he got married and fathered five children. Charlie was the youngest. He never went to school and to this day couldn't read or write. He had worked on farms all his life and had outlived his wife and four kids, save one.

He felt that Franklin Roosevelt was the greatest president, but he wished that Jesse Jackson would one day would live in the White House. If Jesse couldn't make it, then Colin Powell would make a good second choice, to keep some honor in politics.

This intriguing old man captivated me for an hour. He was an enthusiastic, walking, talking history book. He hadn't been out of the county in his 91 years, but he had listened to radio, then television, and stored everything he had learned in a lucid memory. As he talked, a pattern of his life and his attitude illuminated every historical perspective. What held my attention was his span of reference. He was born in 1889 before electricity, before cars, before paved roads. In his time, he had seen the entire modern world develop with unbelievable speed.

"What was the greatest moment of your life?" I asked.

"How about the worst?"

"Lotta' worsts young fella'," he said. "These many years ¬later, Charlie can't figure out why human beings has to keep ¬hurtin' each other."

"What's the most important thing in life?" I asked.

Later, Charlie departed with his 70-year-old son. I watched as they sped away down the dusty dirt road leading into the Georgia back country.

The next day, I reached the Atlantic Ocean. My coast-to-coast adventure ended, but Charlie and dozens of other people convinced me that nothing ends until you die. Without question, living is an attitude manifested by spirit.

Bicycle touring affords the spiritual vehicle for adventure that I call traveling at the 'human speed.' It beats the measured pace of walking, yet surpasses in quality experiences the alacrity of 60 mile per hour. You smell the flowers along the way. The day is yours and the road leads you to anywhere in the world. Along the way, some of the people you meet, share the simplest, truest truths in life. Have I ever changed the oil in my knees?

Only when they squeak.

Frosty Wooldridge, on tour, 1975, southern tier, second coast to coast of my 15 cross continent journeys across America and part of my six continents of bicycle travel. 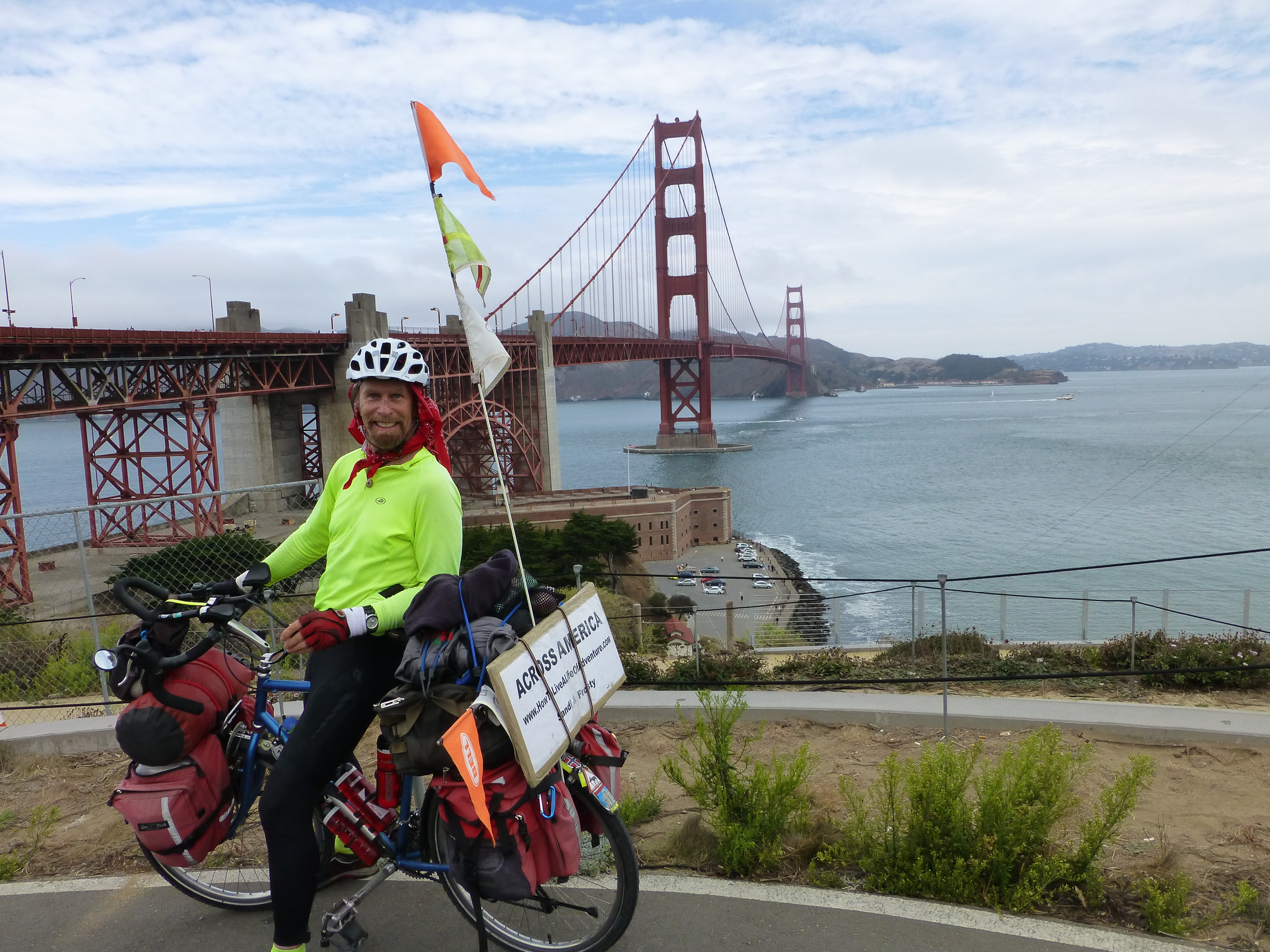 FP Promote:
Not on Front Page
顶部
Back to top
Donate
Logout
Join